Don’t Wait: 5 Reasons Why You Should Buy a Home Today

Patience is a virtue—but when it comes to the current housing and mortgage market, it may also be a disadvantage! If you’re waiting for the opportune time to buy a home, here are five things you should know about the state of the market that may inspire you to act.

In January, home price growth had the fastest increase since April 2015, according to the National Association of Realtors (NAR). While the most recent data shows that price appreciation has slowed some in February, it continues to outpace wage growth, and NAR predicts a 4-5 percent increase in median existing-home price for all of 2016. This trend is largely due to tight housing supply and growing demand: total housing inventory is down 1.1 percent from a year ago, and the share of first-time buyers is up from 29 percent a year ago to 30 percent in February, NAR reports. The most obvious implication of rising prices is that the longer you wait, the higher the chance that the home you love could get more expensive – at least in the foreseeable future.

Tight housing supply creates more competition in the marketplace, which has the potential to drive prices even higher. Already, particularly in the D.C. market, where we’ve historically seen regularly-low levels of inventory, an environment has arisen in which homes are under contract shortly after their listing—9 days or less in top areas. Many expect the 2016 spring housing market to be even stronger than last year, meaning that high demand should motivate buyers to be prepared when entering the marketplace.

Despite an increase in prices, buying a home still remains very affordable. As of March 11th, rates remain 33 basis points lower than they were in end-of-year 2015, 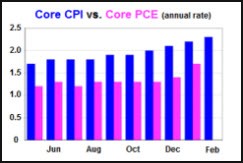 signaling great opportunities for serious buyers to lock in a low rate while the market is in flux. As rates have been near historic lows for a very long time now, buyers who wait also run the risk that rates may rise, especially considering the Fed’s much-discussed increase in the Federal Funding Rate. While many factors affect rates, recent economic data in the Core PCE price index (a monthly inflation indicator used by the Fed) has shown that inflation is rising faster than expected—which could have negative affect on mortgage rates.

4. Buying Beats Renting, Even for Millennials

The often-discussed next wave of homebuyers, Millennials, have their own set of unique challenges when it comes to homebuying. Many have been sidelined as a result of the pressures put on them by the Great Recession, student loan debt, or credit limitations. Despite these hurdles, buying a home still remains 23 percent cheaper than renting for millennials nationwide, and it remains 36 percent cheaper than renting on a national basis, according to a Trulia report released last year. As the economy improves, millennial buying power increases, and rent costs continues to rise, the incentive for buying will only get stronger—but the cost of waiting could grow.

5. MI Tax Deductibility Was Extended for 2016

In December of last year, the President signed legislation that renews a homeowner’s ability to deduct mortgage insurance from their taxes through 2016. This act carries on this tax benefit of homeownership for most borrowers (depending on income eligibility - consult a tax adviser), in particular it benefits those who choose a low down payment, conventional loan option. This, of course, is only one of the many benefits of buying a home — experiencing pride of ownership, building equity, and deepening your relationship with community are advantages as well.

What This Means for You

If you’re thinking about putting plans in motion to buy a home, getting started sooner rather than later could be in your best interest. Get started now, and you could be in your new space just in time for the warm weather!  Learn how to Kickstart the Homebuying Process.

5 Benefits of a 15-Year Mortgage

Top 4 Myths for Giving Your Child a Down Payment Gift