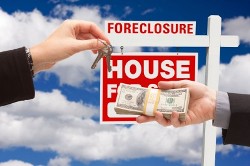 Foreclosure actions increased by 2.0 percent in May from April's 75 month low point for foreclosure activity according to RealtyTrac's U.S. Foreclosure Market Report released June 11. However, the good news is that May 2013 foreclosure filings were still 28 percent below May 2012 filings. RealtyTrac reports that approximately one in 885 homes were in some stage of foreclosure in May. This does not mean that 1 in 885 homes was lost to foreclosure, but it does indicate that documents related to some phase of foreclosure (Notice of Default, Notice of Trustee Sale, and Bank Reposession) were filed. Actual lender repossessions (REO) increased by 11 percent in May, but were down by 29 percent as compared to May 2012. 33 states reported increases in REOs with North Carolina, Oregon and Wisconsin having the highest numbers of REO properties added.

Bank Owned Properties Provide Buying Opportunities Lender-owned properties provide potential opportunities for first-time buyers and others seeking affordable homes. Mortgage lenders tend to offer attractive sale terms on REO properties, as their objective is to move these homes out of their inventories as quickly as possible. Some foreclosure properties are also lacking current maintenance and are often sold as-is. DIY enthusiasts can buy and renovate foreclosed homes for owner occupancy or investment.  It's a good idea to discuss your interest in the opportunities available for financing a Rockville lender-owned home with your trusted mortgage professional.