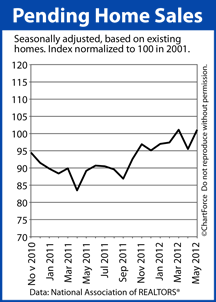 In July, the third time this year, the Pending Home Sales Index crossed its benchmark value of 100, moving to 101.7.  A "pending home sale" is a home under contract to sell, but not yet sold. Data for the index is collected by the National Association of REALTORS® and published monthly. The rise in July's Pending Home Sales Index reading is important for two reasons -- both of which highlight a U.S. housing market in recovery. Buyer and sellers in Washington, DC and across the country would do well to pay attention. First, the Pending Home Sales Index is at its highest point since April 2010, the last month of that year's federal home buyer tax credit. From this, we can infer that the rate at which homes are selling in DC and nationwide is approaching the same "stimulated" levels that the tax credit afforded two-plus years ago. The difference is that today there are no buyer tax incentives. The Pending Home Sales Index readings have climbed steadily since the tax credit's expiration, too :

Second, because the Pending Home Sales Index is a relative index; and, because it was assigned a value of 100 when it was launched by the real estate trade group in 2001, when the PHSI reads higher than 100, it tells us that homes are going under contract at a faster pace than they did during the index's first year. 2001 was a strong year for the U.S. housing market. 2012 is on path to be a stronger one. 80% of homes go to closing within two months of contract so, based on the July 2012 Pending Home Sales Index, we should expect for the Existing Home Sales report to rise through the rest of summer and into fall. Home supplies may drop and home prices may rise. The housing market has expanded slowly and steadily dating to October 2011. Based on last month's PHSI, that momentum will continue.