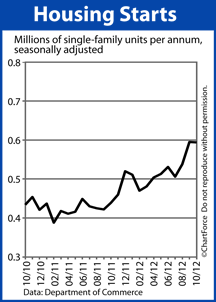 According to a joint release from the U.S. Census Bureau and the Department of Housing and Urban Development, Housing Starts rose 3.6% in October 2012, climbing to a seasonally-adjusted, annualized rate of 894,000 units. A "housing start" is a new home on which construction has started and the report gives buyers and sellers across MD yet one more reason to be optimistic for the 2013 housing market. Regionally, Housing Starts varied. The West and Midwest Regions posted gains between September and October 2012; and, the South and Northeast Regions posted declines. The latter was affected by the effects of Hurricane Sandy.

Single-family housing starts -- starts for homes not considered multi-unit properties or to be apartment buildings -- was mostly unchanged, slipping 1,000 units on a seasonally-adjusted annualized basis. The Housing Starts data is the third housing-related release this week that hints at a strong start for the 2013 housing market. Early in the week, the National Association of Homebuilders released its Housing Market Index (HMI), a measure of home builder confidence in the new construction market. The HMI posted 46 -- the highest reading since 2006. With mortgage rates low and buyer traffic high, builders are expecting a rash of sales between now and the New Year, and an elevated number of closing over the next six months, in general. The HMI is scored on a scale of 1-100. One year ago, it read 19. Then, the National Association of REALTORS® showed Existing Home Sales climbing 2.1% and home supply fell to a multi-year low. At the current sales pace, the entire U.S. home inventory would be sold in just 5.4 months. Analysts believe that a home supply of less than 6.0 months favors home sellers. In unison, these three housing market reports suggest a sustained, national housing market recovery. Home prices are expected to rise into next year's housing market.