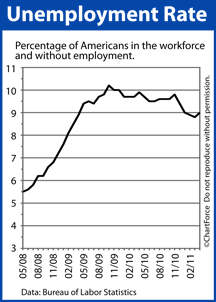 Tomorrow morning, at 8:30 AM ET, the Bureau of Labor Statistics releases its Non-Farm Payrolls report for May. If you're floating a mortgage rate right now -- or are in the process of shopping for a loan -- consider locking your rate sooner rather than later. The Non-Farm Payrolls report can be a major market mover, causing large fluctuations in both conforming and FHA mortgage rates in Rockville. It's because of the report's insight into the U.S. economy. More commonly called "the jobs report", Non-Farm Payrolls is issued monthly. Sector-by-sector, it details the U.S. workforce and unemployment rates.  Jobs momentum has been strong. Through 7 consecutive months, the economy has added jobs, the government reports. Nearly 1 million new jobs have been created during that time. These are strong figures for a country that lost 7 million jobs in 2008 and 2009 combined. However, Wednesday, a weaker-than-expected "preview" figure from payroll company ADP has Wall Street wondering whether this month is the month that the winning streak ends. May's ADP data fell so far short of expectations that investors have had to re-assess their job growth predictions. Earlier this week, the consensus was that 185,000 new jobs were created in May. Today, those estimates are much lower. The change is leading mortgage rates lower, too. The connection between jobs and mortgage rates is somewhat straight-forward. Job growth influences mortgage rates because jobs matter to the economy. As job growth slows, so does the economic growth, and that puts downward pressure on mortgage rates. The opposite is true, too. Strong job growth tends to lead mortgage rates higher. So, with job growth estimates revising lower, Wall Street has adjusted its "bets" and that's benefiting rate shoppers across DC. Should the actual jobs figures not be so bad, though, expect a quick and sharp reversal; and much higher mortgage rates for everyone. The safe move is to lock your rate today.