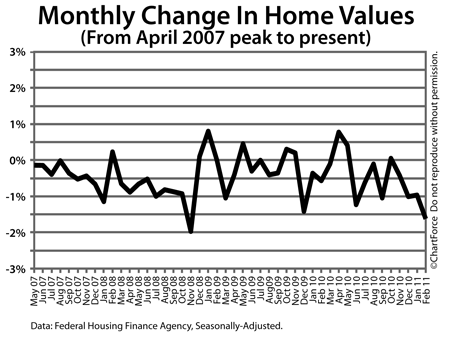 In an echo of February's Case-Shiller Index report, the government's own home price-tracker -- the Home Price Index -- showed home values slipping between January and February 2011. The Federal Home Finance Agency data had home values down 1.6 percent nationwide in February, on average, marking the fourth straight month in which prices fell.  Furthermore, all 9 regions posted losses from the month prior:

Before you draw conclusions, however, note that the data at which we're looking has several major flaws to it. First, it's old. We're now in the first week of May and the FHFA's most recent release only covers through February, a time period ending roughly 60 days ago. That's a long delay and today's purchase market in Rockville looks much different from the one of February.  Just ask a real estate agent and they'll tell you -- purchase activity is rising. Second, the FHFA Home Price Index reports on home value changes between consecutive Fannie Mae or Freddie Mac-securitized transactions only. This might be creating an overweight of "distressed properties" in the index which, in turn, drags down valuations. Distressed homes account for 40% of all home resales and typically sell at 20 percent discounts. And, lastly, although the Home Price Index is a national report, real estate as a market is decidedly not national. To the contrary, it's extremely local. As an individual, you don't buy, sell or own homes in all 50 states. You buy them in a specific state, and a specific neighborhood ; in places like Capital Hill.  The national data is useless to you in that respect. We can't discount the Home Price Index data entirely, but should remember that it paints a clearer picture of where housing has been versus where housing is going. As a home buyer or homeowner, it's the future of home values that matters more.