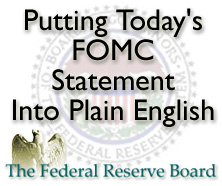 Wednesday, the Federal Reserve's Federal Open Market Committee voted to leave the Fed Funds Rate unchanged within its current target range of 0.000-0.250 percent. The Fed Funds Rate has been near zero percent since December 2008. For the third consecutive month, the Fed Funds Rate vote was nearly unanimous. Just one FOMC member dissented in the 9-1 vote, objecting only to the language used in the Fed's official statement. In its press release, the Federal Reserve noted that the the U.S. economy has "expanding moderately" since its last meeting in December 2011, adding that the growth is occurring despite "slowing in global growth" -- a reference to ongoing economic uncertainty within the Eurozone. The Federal Reserve expects moderate economic expansion through the next few quarters but is wary of "strains" from global financial markets, and these three threats to the U.S. economy :

On the positive side, the FOMC said that household spending is rising and inflation remains in-check. The group also believes that employment will gradually improve nationwide going forward. The Federal Reserve neither introduced new economic stimulus, nor discontinued existing market programs. Immediately following the FOMC's statement, mortgage markets rallied, pressuring mortgage rates to fall in and around Bethesda.  Mortgage rates remain near all-time lows and, for homeowners willing to pay points plus closing costs, conventional, 30-year fixed rate mortgages can be locked at below 4 percent. If you're in the process of buying or refinancing a home in VA , it's a good time to lock a mortgage rate with your lender. The FOMC's next scheduled meeting is a one-day event slated for March 13, 2012.