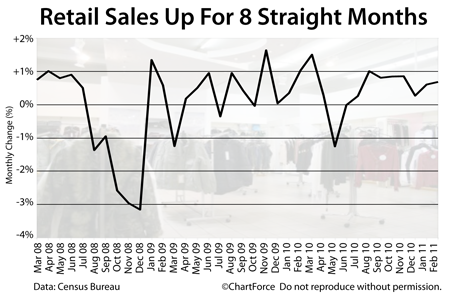 Consumer spending is alive and well, it seems -- unwelcome news for today's home buyers.  Wednesday, the Census Bureau will release its March Retail Sales figures and the report is expected to show higher sales receipts for the 9th straight month. A strong reading like that should spell higher mortgage rates in Washington, DC and nationwide. The connection between Retail Sales and mortgage rates is fairly tight. Retail Sales are "consumer spending" and consumer spending accounts for the majority of the U.S. economy. The U.S. economy, of course, is a dominant force in setting the direction in which mortgage rates are headed. For example, in 2010, it was a weak economy and murky outlook that helped drive mortgage rates to all-time lows. Since last year, however, the jobs market has started its recovery, monthly receipts have returned to all-time highs, and the Federal Reserve is revising growth estimates for 2011. Not surprisingly, mortgage rates have reversed, too. As compared to 6 months ago, conforming rates are higher by 0.750%. Home affordability across DC is taking a hit. Plus, the stronger the economy appears to be, the more likely for mortgage rates to climb more. It's why tomorrow's Retail Sales report is so important.  If you're under contract for a home, or even evaluating the merits of a refinance, there's a lot of risk in "floating" your mortgage rate. The more prudent plan is to find a rate at which you're comfortable with the payment, and lock it in. And you may want to take that lock sooner than you had planned -- if only to protect your monthly payments. Once tomorrow's Retail Sales report hits, it may be too late. Especially if receipts rise for the 10th straight month. The Retail Sales report is due for release at 8:30 AM ET.