Planning Ahead For The Federal Reserve's Next Move 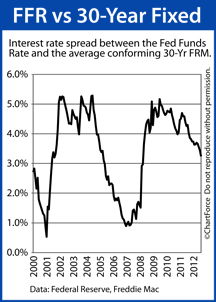 In Washington, D.C. today, the Federal Open Market Committee (FOMC) begins a 2-day meeting, its fifth of 8 scheduled meetings this year. Mortgage rates are expected to change upon the FOMC's adjournment. Rate shoppers and home buyers of Washington, DC would do well to be alert. The Federal Open Market Committee is a rotating 12-person subcommittee within the Federal Reserve. It's the group which makes U.S. monetary policy.  "Making monetary policy" has many meanings but the action for which the FOMC is most well-known is its setting of the Fed Funds Funds. The Fed Funds Rate is the prescribed interest rate at which banks borrow money from each other overnight. Since late-2008, the Fed Funds Rate has been near zero percent. The Fed Funds Rate and Freddie Mac's 30-year fixed rate mortgage rate move along different paths. Sometimes, the two converge. Other times, they diverge. They've been separated by as much as 529 basis points in the past 12 years, and they've have been as near to each other as 52 basis points. Clearly, there's no correlation between the Fed's Fed Funds Rate and the common 30-year mortgage. However, with its words, the Federal Reserve can influence the direction in which mortgage rates move -- on occasion, by a lot. We'll be witness to this Wednesday. When the FOMC adjourns, it is expected to announce no change in the Fed Funds Rate. Yet, based on the verbiage of the post-meeting statement, mortgage rates will rise or fall accordingly. If the Fed notes that the economy is sagging and that new stimulus is planned, mortgage rates are expected to drop throughout DC. This is because new, Fed-led stimulus would be a boon for mortgage markets which would, in turn, drive mortgage rates down. Conversely, if the Fed acknowledges growth in the U.S. economy and/or little need for new stimulus, mortgage rates are expected to rise. Either way, expect rates to change -- we just can't know in what direction. The FOMC adjourns at 2:15 PM Wednesday.