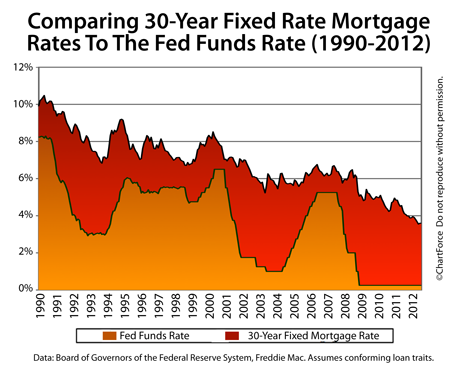 The Federal Open Market Committee ends a 2-day meeting today, the group's sixth of 8 scheduled meetings this year. As a Bethesda home buyer or would-be refinancer, be ready for mortgage rates to change. The Federal Open Market Committee is a 12-person sub-committee of the Federal Reserve. Led by Fed Chairman Ben Bernanke, it's the group within the Fed tasked with voting on U.S. monetary policy. The act for which the FOMC is most well-known is its management of the Fed Funds Rate. The Fed Funds Rate is the interest rate at which banks borrow money from each other overnight. It's one of several interest rates under Federal Reserve management. "Mortgage rates", however, is not among them. The Federal Reserve does not set or make mortgage rates -- Wall Street does. Further, there is no historical correlation between the Fed Funds Rate and the average conforming 30-year fixed rate mortgage rate. At times, the two benchmark rates move in the same direction. Other times, they diverge. They've been apart by as much as 5.29 percent, and have been as near as 0.52 percent. Today, the spread between the Fed Funds Rate and the 30-year fixed rate mortgage rate is roughly 3.34%. That will change beginning at 12:30 PM ET today. This is the time at which the FOMC adjourns and releases its public statement to the markets. The FOMC is expected to announce no change in the Fed Funds Rate, leaving it within its current target range of 0.000-0.250%. How mortgage rates throughout MD respond to the Fed, though, will depend on whether the nation's central banker adds new market stimulus in the form of a third round of quantitative easing. If the Fed adds new stimulus and it's deemed large enough to be propel the economy ahead, stock markets will gain and bond markets should, too. This would lead mortgage rates lower. Conversely, if the size of the stimulus is deemed too small to be effective, mortgage rates will rise. Maybe by a lot.

Thinking About Buying An Investment Property? 6 Tips To Ensure You Don't Get Fleeced

Small Business Owner? Here's What You Need To Know About Mortgages

Should I Shorten My Mortgage Term, Important Factors To Consider