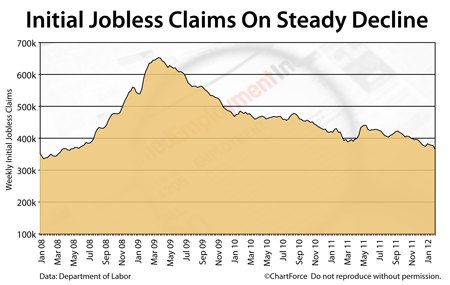 Economists believe the strength of the 2012 housing market will be closely tied to jobs. If they're right, the housing market is ripe for a boost. It spells good news for Rockville home sellers and may mean the end of bargain-basement prices for buyers. Since peaking in mid-2009, the number of U.S. workers filing for first-time unemployment benefits has dropped 44 percent. Over the same period of time, the U.S. economy has added more than 2 million jobs and the national Unemployment Rate is down more than 1 percentage point to 8.3%. Employment's link to the housing market of Capital Hill is both economic and psychological. To make the economic link is straight-forward. A person with a job earns verifiable income and such income is required in order to be mortgage-eligible. For conventional and FHA purchase loans, for example, mortgage lenders want a home buyer's monthly income be more than double his monthly debts.  For the formerly unemployed that have since returned to work, having a full-time income makes buying homes possible. It also supports higher home valuations nationwide because home prices are based on supply-and-demand. All things equal, when the number of buyers in a market goes up, prices do, too. The psychological connection between housing and employment is a tad more complicated, but every bit as important. It's not just out-of-work Americans that don't look for homes -- it's fearful Americans, too. People with concerns about losing a job are just as unlikely to shop for homes as people actually without a job. The same is true for people unsure of their prospects for a better-paying job, or their own upward mobility. A recovering job market can lessen those fears and draw out buyers -- especially those who face a loss on the sale of an "underwater" home. The Initial Jobless Claims rolling 4-week average is at its lowest level since 2008. Fewer Americans are losing jobs, and more are finding permanent placement. It's one more reason to be optimistic for this year's housing market.