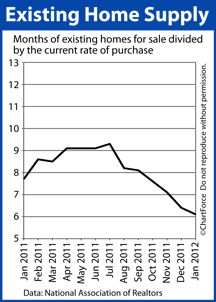 January's home resales moved to a 20-month high -- additional evidence that the nation's housing recovery is underway. According to the National Association of REALTORS®, the January 2012 Existing Home Sales showed 4.57 million units sold last month on a seasonally-adjusted, annualized basis -- a 4 percent increase as compared to December's revised figures. An "existing home" is one that's been previously occupied and cannot be categorized as new construction. Beyond the headline numbers, though, there was plenty about which for today's Washington, DC home sellers to get excited. Demand for homes remains strong, foreshadowing higher home prices through 2012. First, the national housing stock is at a 5-year low. In January, the number of homes for sale nationwide slipped to 2.31 million, the smallest home inventory since February 2007, and a 21% decrease from just one year ago. Falling home supply amid constant home demand leads home prices higher. At the current pace of sales, today's complete home inventory would "sell out" in 6.1 months.  Analysts say that a 6-month supply is a market in balance. Anything less is Bull Market territory. Second, the National Association of REALTORS® says that one-third of all homes under contract "failed" last month. This means that many more buyers tried to buy, but couldn't for a number of reasons including mortgage denials; or, insurmountable home inspections issues; or, homes appraising for less than the contract price. As contract failures subside, Existing Home Sales are expected to rise even faster. And, lastly, first-time buyers continue to power the home resale market. In January, 33% of all sales were made to first-time buyers, up four points from last year. This statistic suggests that renters are moving into homeownership, an important component in a sustained housing market recovery.   Given high demand and shrinking supply, we should expect for Bethesda home prices to rise in the coming months, if they haven't already. Thankfully, mortgage rates remain near all-time lows. Low mortgage rates make homes more affordable.

Existing Homes For Sale At Lowest Point In 11 Years